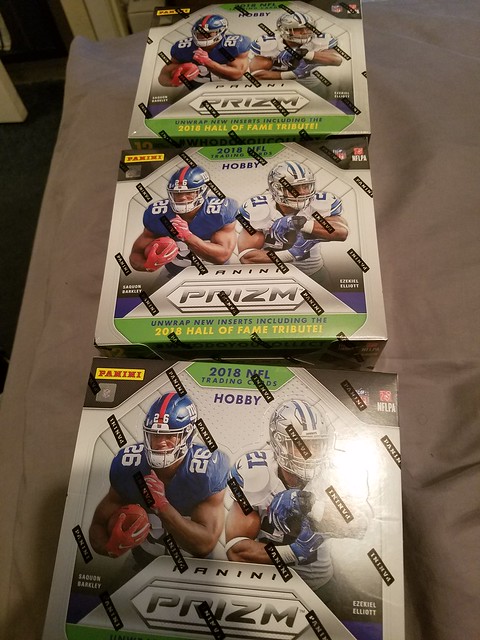 So this was the latest Football FOTL product and the anticipation for this product was crazy. With Regular Prizm boxes preselling anywhere from $170-$200 a lot of people were foaming at the mouth to pick this up (a lot of people mainly to flip) at it's suggested MSRP price of $120. True to form as with most FOTL products, it was an instant sellout. Again, I played it safe since I figured I'd only get one chance to order so I had better make it count and ordered 3 boxes. The FOTL exclusives in these is a Blue Shimmer Parallel numbered to 9 and a Blue Shimmer Auto Parallel numbered to 25. I'm not gonna lie though, from the box breaks I've seen of this..it's been very underwhelming borderline brutal. There've been some nice boxes here and there, but I've seen a ton of below average boxes and yes..the dreaded PANINI POINTS were inserts in this product which is a HUGE downer. Anyways, it's not going to stop me from busting, but just tempering my expectations, since a ton of people truly believe Panini "loads" FOTL boxes (I don't believe that one bit). So here's what I got

Overall Thoughts: RANT TIIIIME. WHAT A FUCKING PATHETIC BREAK THIS WAS. JUST TOTALLY GROSS....why does Panini have to COMPLETELY fuck you over when it comes to bad boxes?? I don't expect every box or every other box to be a winner, but good lord, would it kill Panini to at least make some of the higher numbered parallels at least DECENT NAMES?! Like even mid tier rookies like Courtland Sutton/DJ Moore types? My god, the value is absolute dog shit for this and I got it at MSRP! The FOTL exclusive parallels..a shitty defensive end rookie for the Raiders, Lamar Miller and Earl Thomas (in other words WHO CARES). My FOTL "exclusive autos" are two backup running backs  and a WR that the Colts CUT IN PRESEASON. Wow..how fucking awesome. Not only that but Panini was sooooo generous that out of two boxes I pull two autos each of Marcus Davenport and Cedrick Wilson Jr. Most of these fucking autographs are of practice squaders (Danny Etling..Marcell Ateman..man GTFO with this weak ass shit) Just sucks PERIOD. The cards..yeah they're great looking but who cares if all you pull is SCRUBS. AWFUL AWFUL AWFUL. Worst FOTL break hands down. I should've known better because this is the 4th year since I've been back that I've bought Prizm Football and I NEVER get anything worth more than like $5 bucks. Big time disappointed as I basically just threw $400 down the window (I live in Texas...I get hit with tax) and have shit to show for it. Beyond pissed. Do NOT buy this stuff at it's current prices..stick to singles. My god...just so irate. 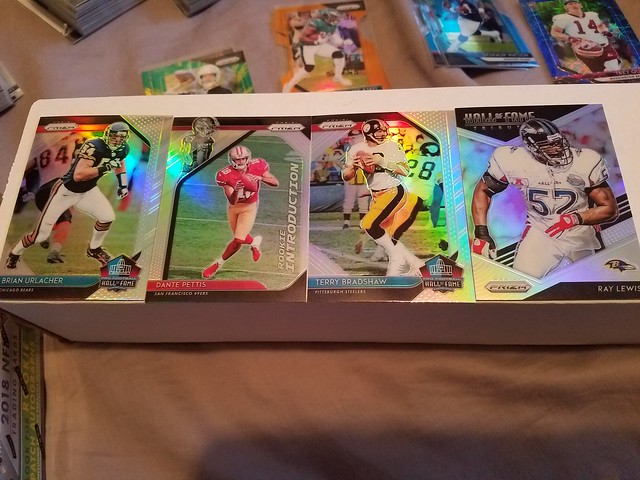 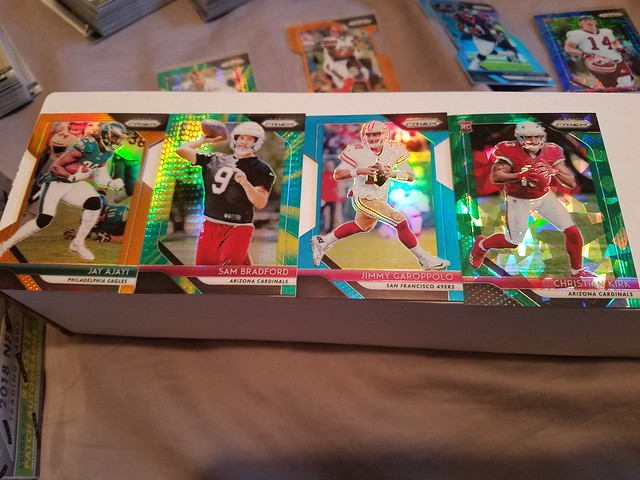 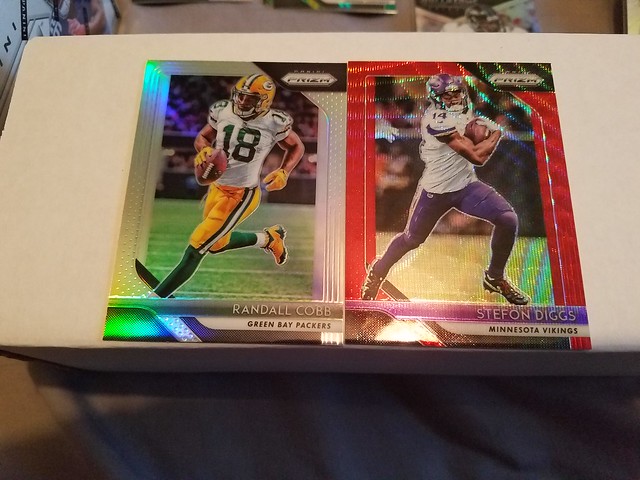 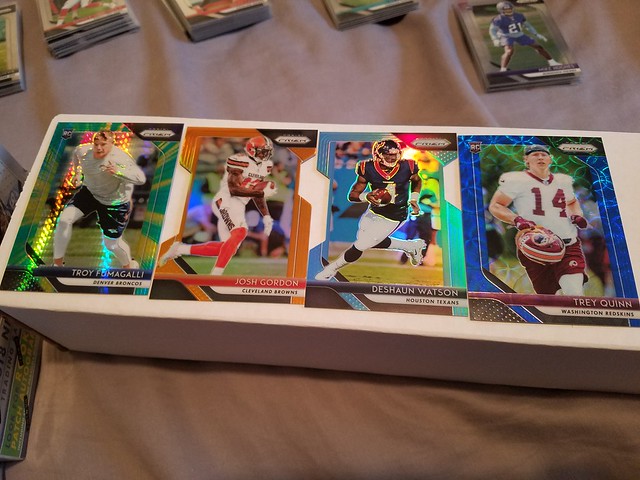 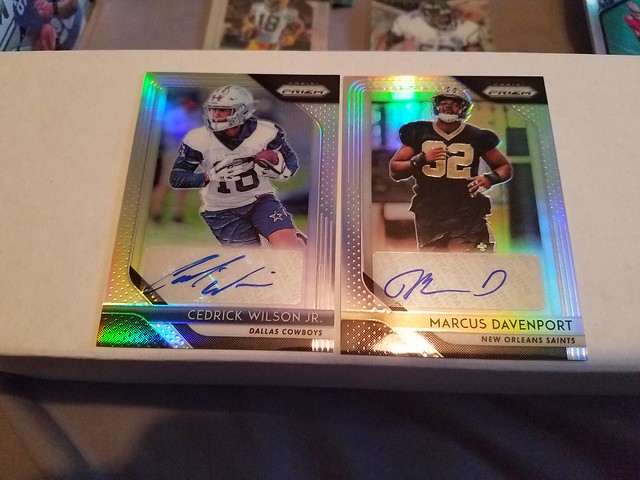 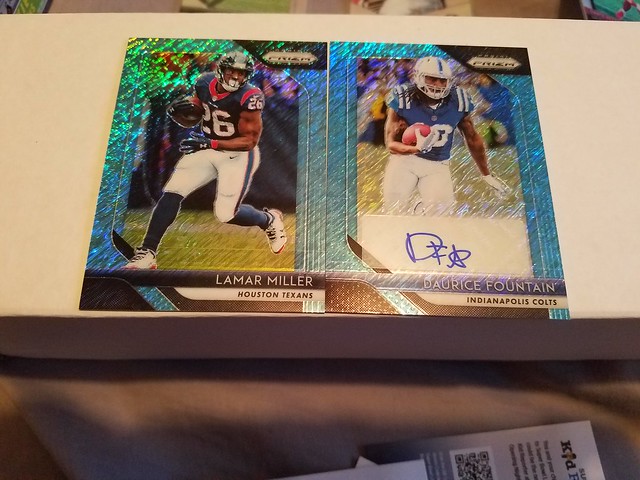 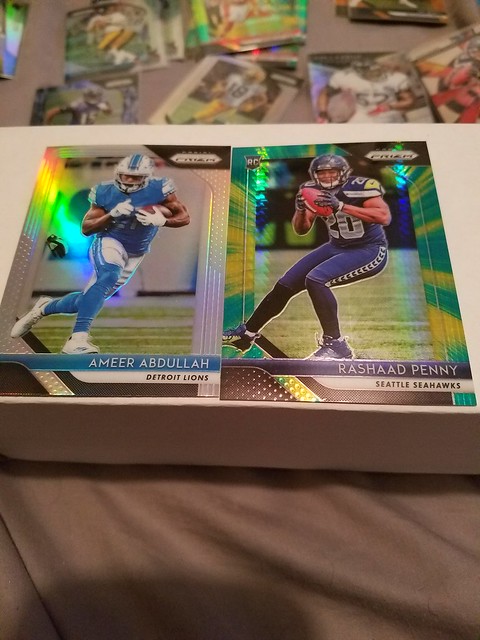 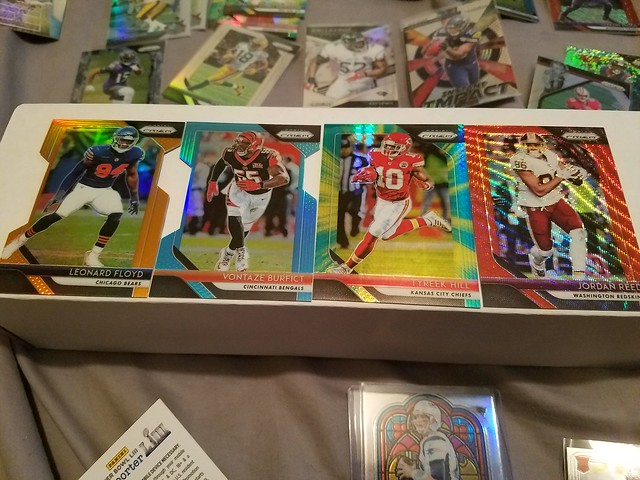 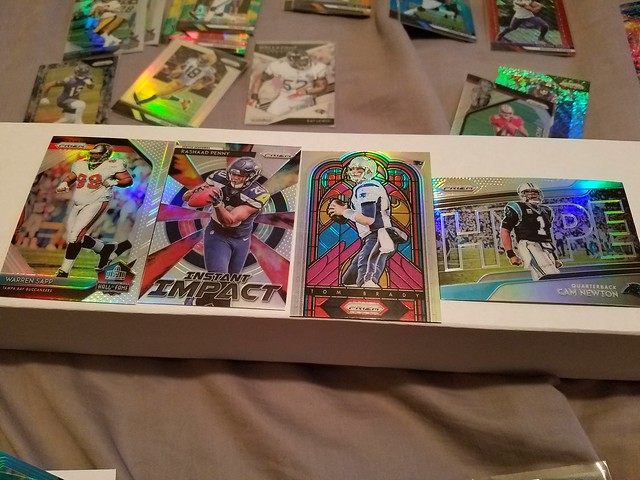 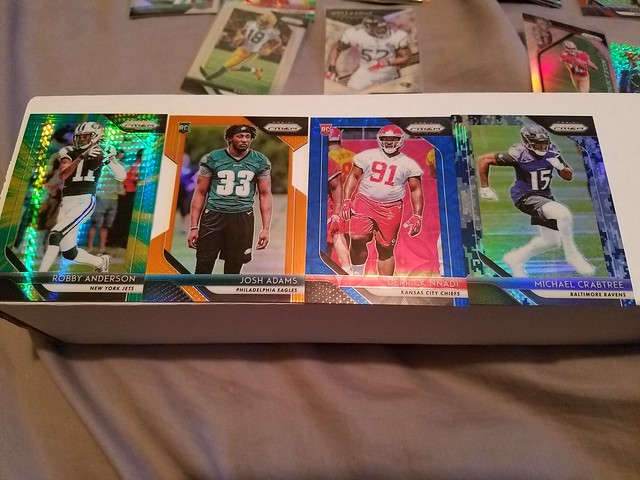 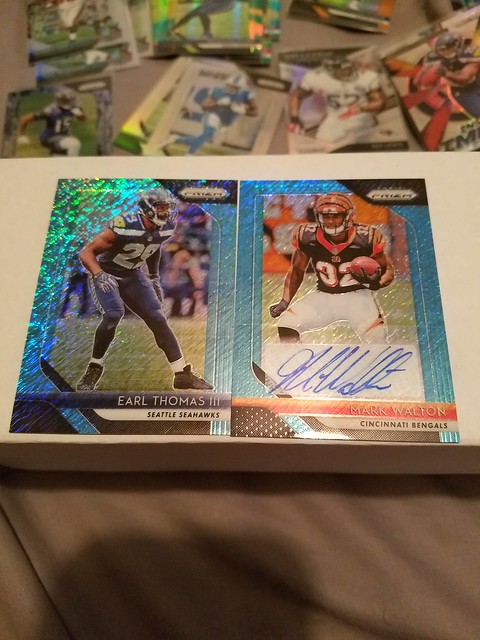 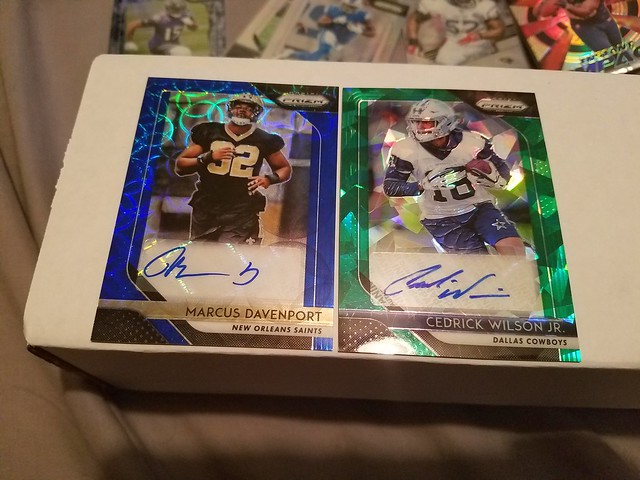 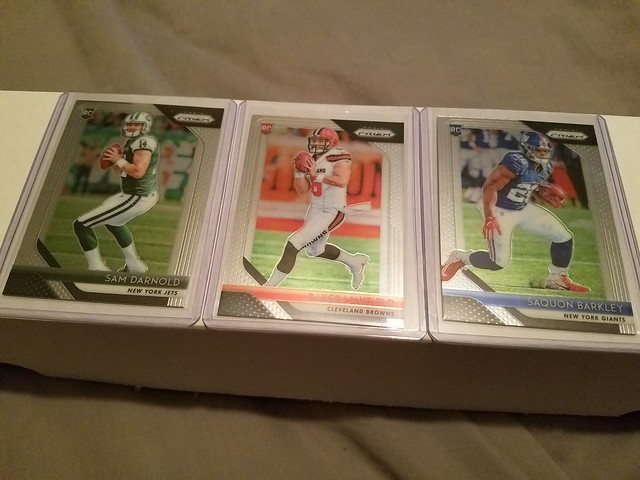 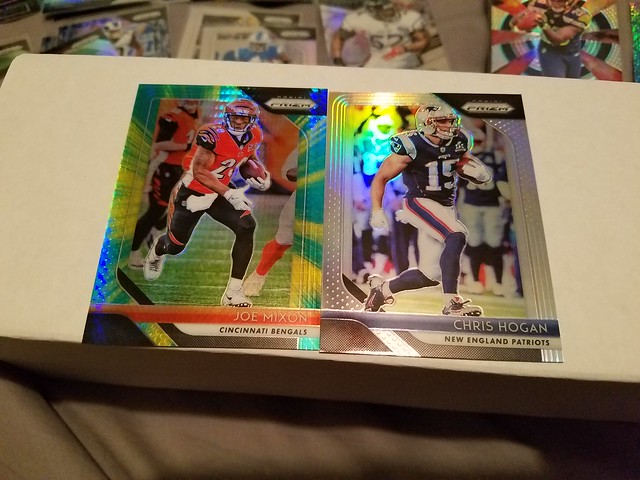 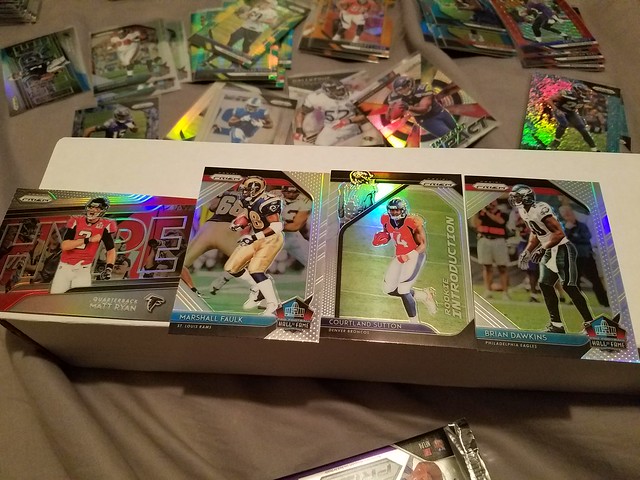 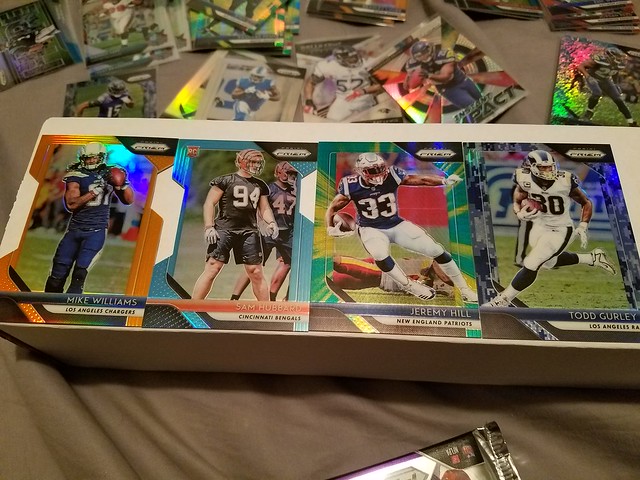 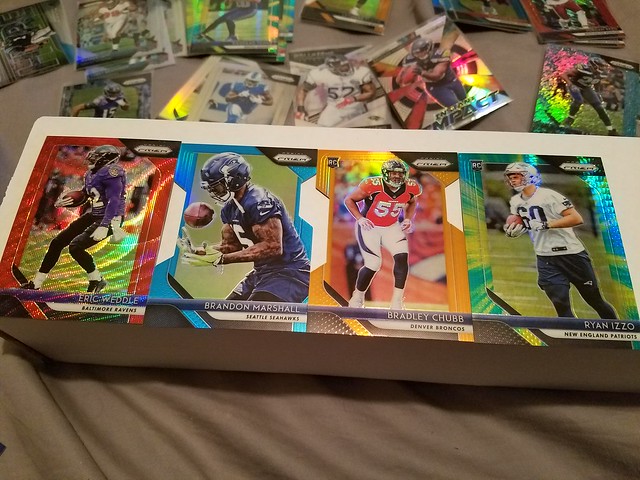 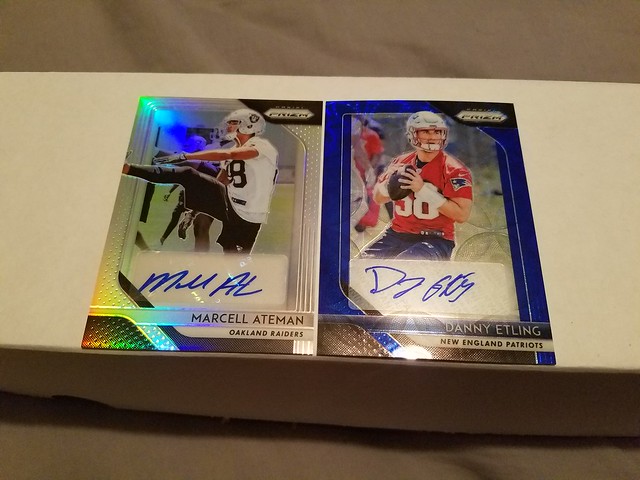 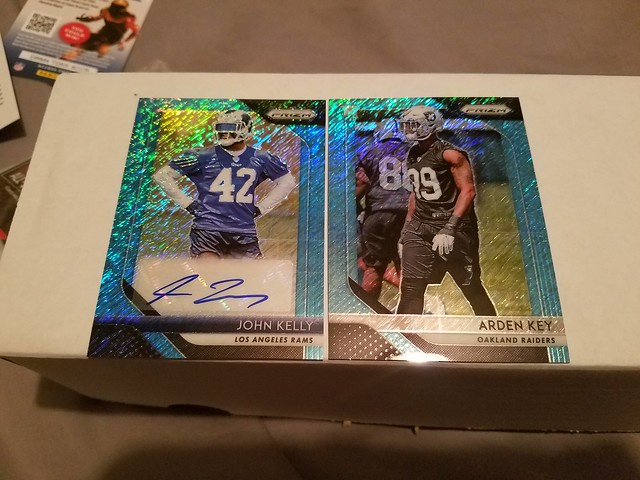