What Was I Thinking?!?!-Baseball Starting LIneup Edition

After finishing my series on SLU's I reflected back on all the lineups I bought throughout the years and remembered the good ones.....and the bad ones as well. This post will showcase what I believe are the 5 WORST lineups I ever bought in Baseball. Yes I paid full retail for these babies...brace yourself 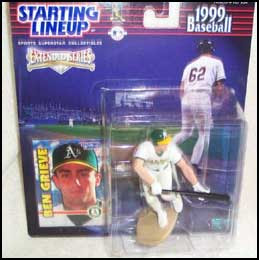 I worte about this and J.D. Drew piece earlier in one of my SLU Blog posts, but seriously in the middle of a HURRICANE, I went to HEB to BUY THIS FIGURE (Along with J.D. Drew). Ben Grieve, you will live in infamy. 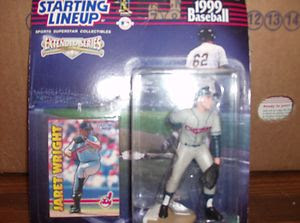 Remember when Hasbro made a Jaret Wright SLU 2 seasons too late? Remember when I bought it anyway??? Yet another infamous HEB find (this time in Flour Bluff, which is a good 20-25 minutes away from my house). 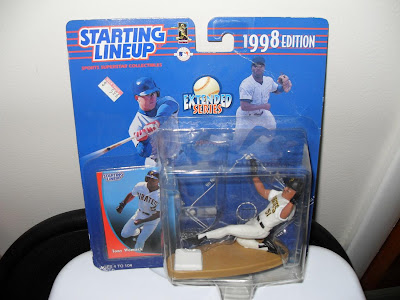 In 1998 I asked myself one question....who the HELL is Tony Womack and why did they make a figure of him. Well he's in a cool sliding pose so he must good thus I'll buy him. Womack wasn't THAT bad of a player, but he's one of those sit on the shelfs at Wal Mart type guys, yet I STILL bought it. Had I waited, I could have bought it on clearance. I wouldn't be surprised if Wal Mart just threw out the remaining pieces, hell they got one sucker to buy one, and that was good enough! 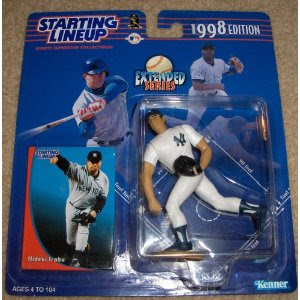 Maybe it's those little stickers, but man I got hammered on Extended Series pieces, all 4 so far have been Extended Series. I bought into the Irabu hype and thought he'd be the next Nomo like ace for the Yankees. He never really panned out unfortunately and in a sad turn of events, he committed suicide last year. This was the 2nd thing I won from SCP's last auction. It's a UDA Emmitt Smith Autographed Jersey that is also inscribed HOF 10. I've always loved the double star Cowboys Jersey and this is a great piece of my favorite Cowboy of all time. It's also limited edition # to 22 with mine being the 8th one. 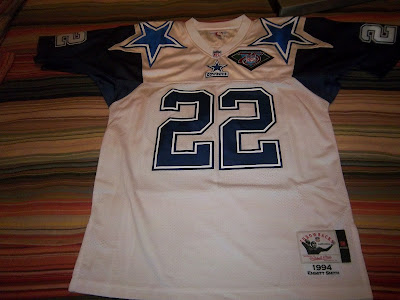 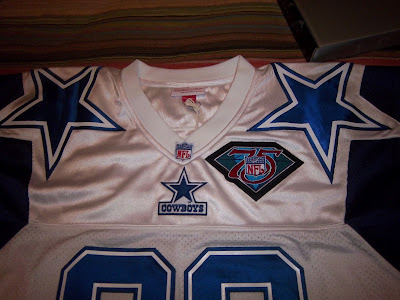 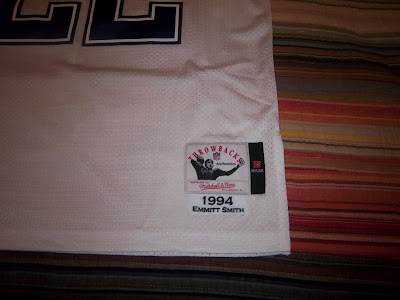 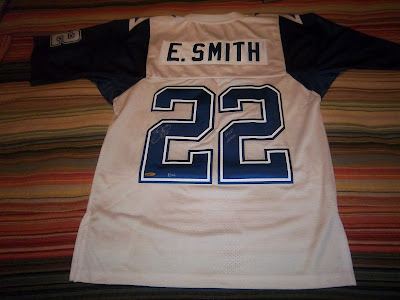 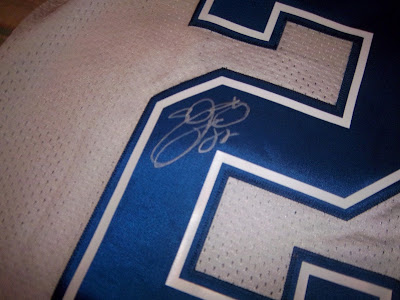 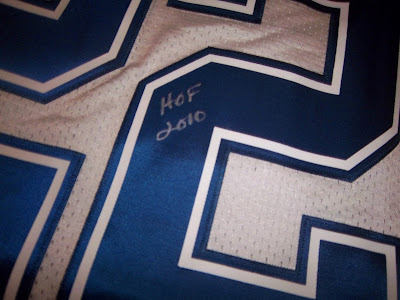 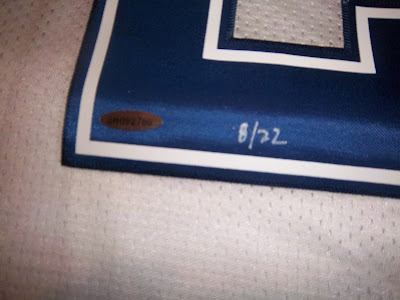 These two men DEFINED rivalry in the 60's. Chamberlain vs Russell...one of the most epic battles in basketball history. Who was better? The scoring and rebounding machine?? Or the guy who led the Boston Celtics to 11 championships in his 13 year NBA Career?? That debate is one of the most hotly contested in basketball, but both were larger than life, as is this gorgeous framed photo I won on SCP's last auction. PSA/DNA Certified, it features large signatures from Chamberlain and Russell. This piece is just amazing, a real nod to basketball history. Enjoy 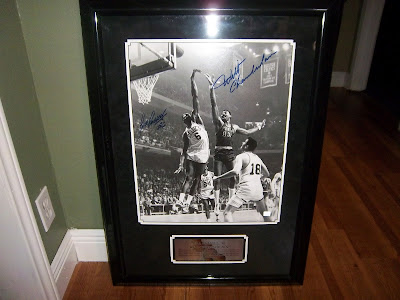 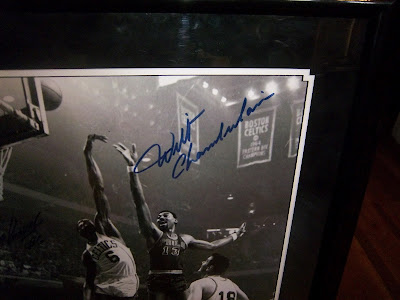 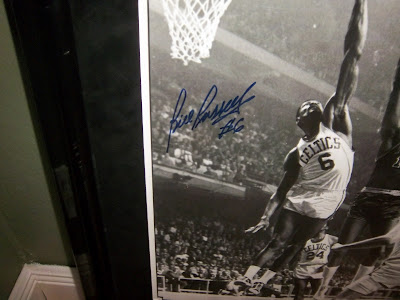 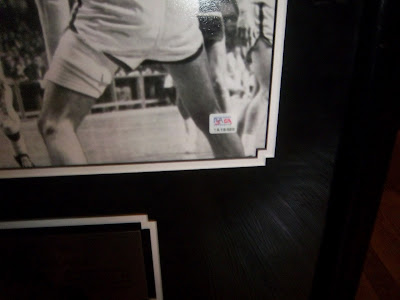 What Was I Thinking?!?!-Football Starting Lineup Edition

After finishing my series on SLU's I reflected back on all the lineups I bought throughout the years and remembered the good ones.....and the bad ones as well. This post will showcase what I believe are the 5 WORST lineups I ever bought in Football. Yes I paid full retail for these babies...brace yourself 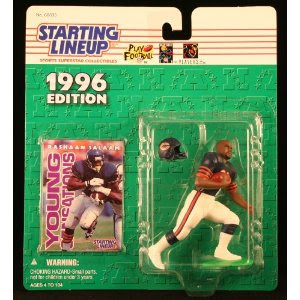 At first you would think you could cut me some slack because this is his rookie piece and he had a terrific rookie season (1,000 yards rushing, 10 TD's), but I remember buying this  2 YEARS after its release at an Albertsons in San Antonio. Why??? NO CLUE, cause I'd never seen it? Salaam was basically done by this point and was irrelevant in the NFL yet I plunked the 7 bucks (or 8, don't remember the retail price at Albertsons) and hung it on my wall "proudly" (At least I didn't pay full price for his Heisman piece, though it does have the cool mini Heisman replica trophy). 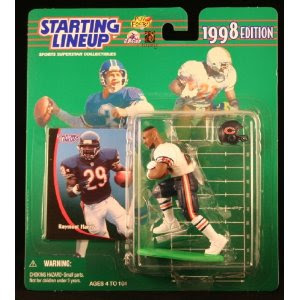 I Spent 7 bucks on a Raymont Harris toy...yes I did. Again, I'm not gonna pretend that I knew he had a 1,000 yard rushing season the previous year for the you guess it BEARS...for some reason I convinced myself that this was a short print and boom into the collection it was. I believe I was a little off on that assumption. At least I was able to use this situation as a fantasy football team name last season (I named my team RuggedRaymontHarris). To this day my friend brings up the fact that I had this hanging in my wall. 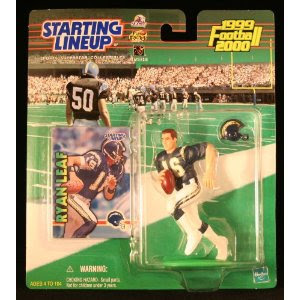 OK, everyone knows the Leaf Story and yes in 1998 it was entirely conceivable to buy anything Leaf, even his 98 rookie SLU. But the writing was already on the wall and still went ahead and bought his 2ND PIECE...that's right a figure that's even worse than a Ryan Leaf Rookie Piece...I guess I still believed. 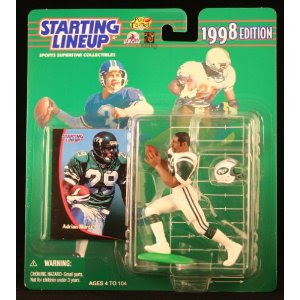 I like the Jets uniforms....seriously that was my reasoning here. Murrell was in the right place at the right time. A mediocre running back who had one decent season (which is all you need to be immortalized in toy form) and ironically finished his career with my Dallas Cowboys. I love those Jets Unis and Murrell was the one guy I could find at the store. Worst reasoning everrrrrr to buy a SLU. 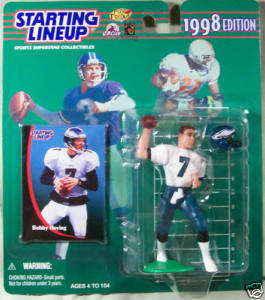 There are soooooooooooo many reasons this is #1. First of all did the 98 series kick my ass or what??? 3 out of the 5 are from this series. Hoying was HORRIBLE. He threw 11 TD passes in 97 and that was IT....period. Never threw another TD pass in his career. When I bought this I NEVER EVEN REALLY HEARD OF HIM. On top of that HE PLAYS FOR THE EAGLES!!! OUR HATED RIVAL!! I bought a shitty ass Eagle for full price to hang up in my room. I don't even have a reason, bad or not, as to why I did this. Why did Hasbro come out with a BOBBY HOYING SLU? Cause they knew one sick-o would buy it.....pleasure to meet you.
Posted by Chris P at 8:08 PM 4 comments:

The newest addition to my game used bat collection comes from Prince Fielder and his Brewers days. This bat which has been PSA/DNA certified is also autographed by Prince (JSA Certified). It's the 2nd autographed game used bat in my collection (ironically his teammate, Miguel Cabrera is the other). Here are the pics! 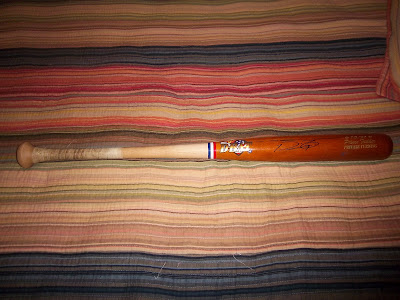 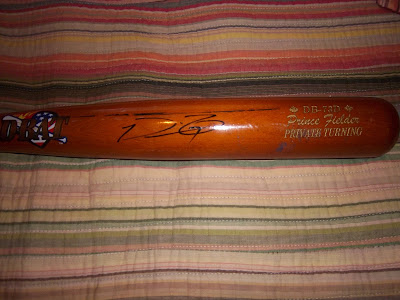 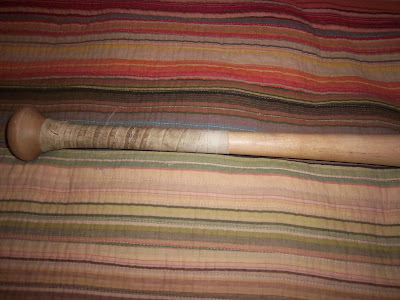 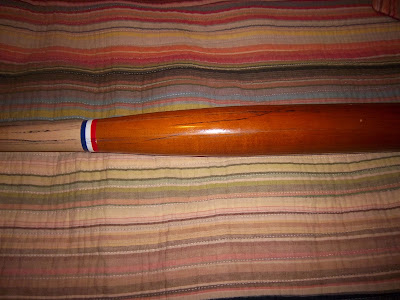 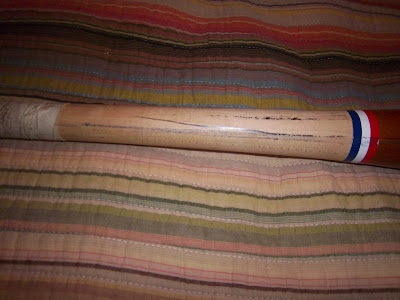 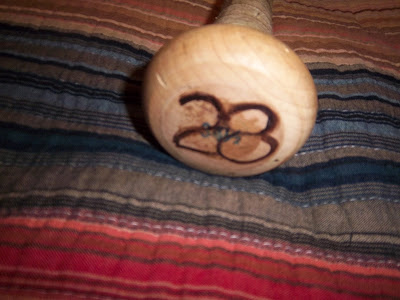 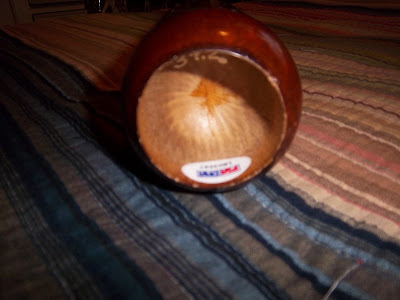 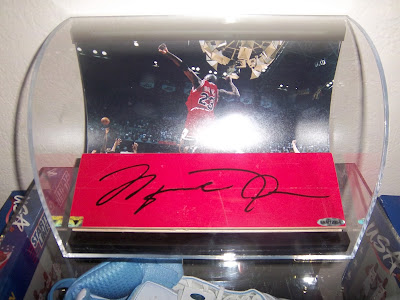 My newest MJ Addition, this is the 3rd MJ Auto in my collection and it features a large gorgeous signature on a piece of floor from the United Center. The picture doesn't do it justice, the signature was way larger than I anticipated and is a very nice piece. I have to say without a doubt this is my favorite MJ autograph of my collection.
Posted by Chris P at 1:05 PM No comments: 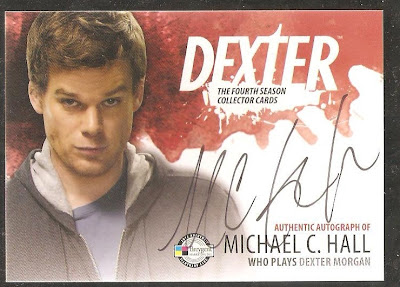 I finally got around to watching Dexter and it quickly became one of my favorite shows to watch. I just finished off seasons 1-5 and every season had me on the edge of my seat wanting more. I vaguely remember Breygent coming out with Dexter cards and decided to browse Ebay and I was able to find this card. Cool to be able to get the star of the show's autograph on card. I saw there are more autographs from the main cast issued in earlier series and it would be cool to get them as well. I didn't really find any on Ebay, but it'll be a side project that I'll be working on slowly.
Posted by Chris P at 3:38 PM No comments: