Here are some of my most recent additions to cardfest! 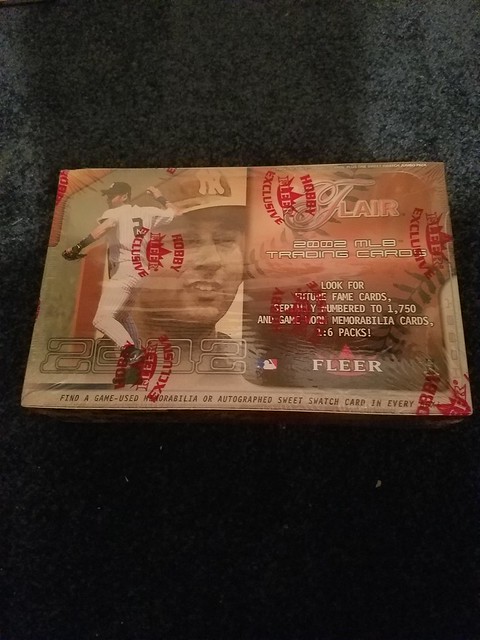 This will be probably be the last old school box I buy after everything I spent so far. Last year I had 1 Baseball and 2 Basketball boxes, this year it'll just be two baseball. This goes back to a time where game used were JUST beginning to get overprodruced as evidenced by the odds of a game used card (1 out of 6 packs). I thought it would be a fun cheap rip because there is possibilites of Derek Jeter autos in the oversized Sweet Swatch card you get in every box. 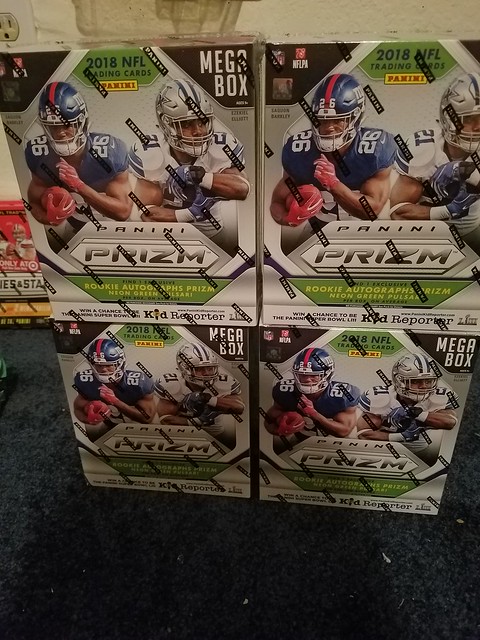 I had absolutely TERRIBLE luck with FOTL Prizm Football, but I'm going to give retail a go with these Mega Boxes. The reason I like these particular boxes is a)The Price ($35 as opposed to the Target Pink Refractor boxes which are $50) and they have Green Pulsar Parallels, which look AWESOME from the breaks I've seen. The only downside is...yep...there's basically a 90% chance I get points in at least one of the boxes which SUCKS but it's still a risk I'm willing to take. 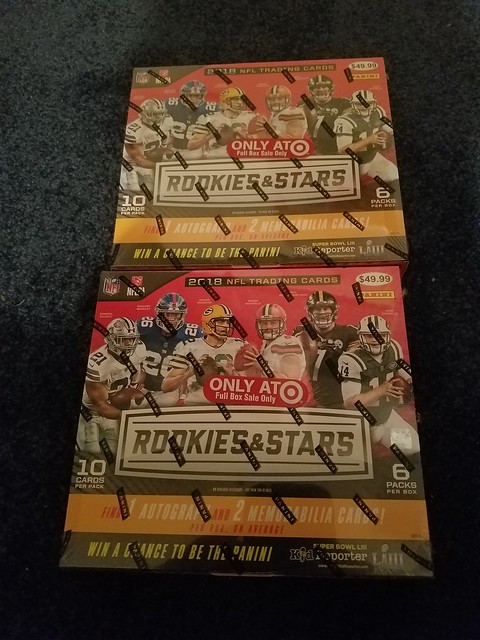 I tried this product last year as well, and if you recall I had ordered two boxes, but only got 1 shipped. I also got these when Target was having their 20% off sale so I didn't pay $50 a box which helps. 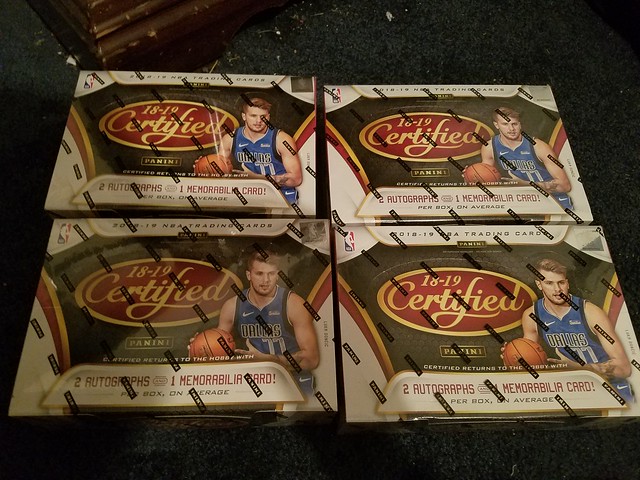 My 2nd 18-19 Basketball Product, Certified replaces Totally Certified for Basketball (which sounds confusing, I know, but it is two different products). Should be a fun mid end rip as I hunt for Luka Doncic cards
Posted by Chris P at 9:04 AM 1 comment:

My Thoughts On The Black Friday Sales From "The Big 3" 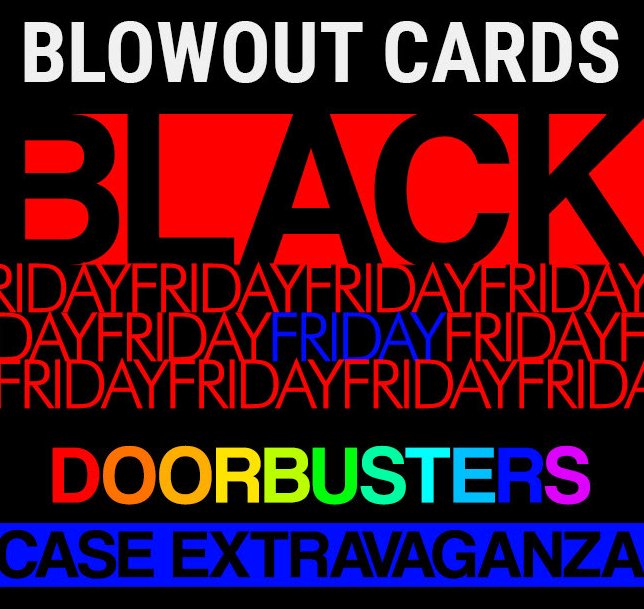 I wanted to address yesterday's "Black Friday" Sales that Blowout, DA Cardworld, and Steel City Collectibles had going. Overall it was very underwhelming in my opinion as far as card deals go. First of all, Blowout decided to change their format and instead of making an all day event (which I thought was part of the fun) they spread it out for Monday, Tuesday, Wednesday, and then had a "Case Extravaganza" on Friday. It just wasn't the same at all plus the majority of the deals were just either totally underwhelming or it' the same old crap they've been discounting for 5+ years that never sells. I hate when people use the excuse "Blowout doesn't have to do this for us" or other excuses that come up to defend how poor Blowout's Black Fridays can be. They aren't doing it "for us"..it's an inventory dump, plain and simple. You think giving us $20 case specials on Elvis retail stuff or Webkins stuff is some kind of sacrifice? It's the same stuff year and year, and it can get really tiring. I mean how many times do you have to see the same 2013 football product on sale for the same amount (sometimes even HIGHER)? I'm not trying to be ungrateful, but it's just the honest truth. If you market something as a Black Friday sale, than it should look like a BLACK FRIDAY SALE! And the "well everyone knows that's how it goes, so why be mad" isn't a valid excuse either. There were deals to be had, no doubt, but the majority of the deals had been available all week and even one notorious one (2018 Heritage High Number Baseball case) actually went UP on Black Friday even though, the whole point of Friday was highlighting a Case Extravaganza! What was the point of pumping Friday up, if the best product of the entire sale was going to be cheaper earlier in the week?! Also, there was literally ZERO advantage of waking up early for the start of the sale, which is really my biggest gripe of it all. The first 2-3 hours of deals most of the deals were either rehashed box deals from earlier in the week that hadn't sold out, or just utter crap retail cases, or stuff like non sport/racing/soccer. There was no reason for me to wake up at 6 A.M  when the best "doorbuster" deal wasn't offered until around 11 or so my time. Were there a couple of decent deal, sure, but nothing that made waking up at 6 worthwhile. A total waste of time. The least they could do, was either have some kind of early bird exclusive sale (even it's just something like hey 1 box of Football Prizm or Basketball Prizm at MSRP) to reward those who decided to wake up earlier than usual for your sale. Or even having one of the better doorbuster sales that early, so those people could take advantage of that sale, instead of competing with everyone else waking up at a normal time. It's just terrible business in my opinion how that happened. I spent more time on Blowout's sale than any and only bought stuff on the Monday wave. I spent a lot of time in the Blowout Cards Black Friday thread and it provided more entertainment than the actual sale. Of course, I didn't understand why people would take offense to others being so upset and disappointed to how underwhelming the sale was. There was a lot of complaints in that thread, but to me all were justified. I'm usually a Blowout guy, but to me, Dave and Adams blew Blowout away in regards to sale prices on products people might be actually interested in. It seems they had a LOT less filler, and they actually had 2018 baseball stuff slightly discounted lower than anyone. And that's my complain about Blowout...even a $5-$10 on some of the most of the recent stuff would've been nice. Yes Blowout had some current stuff marked down, but I felt D&A had the same stuff discounted (and also cheaper) and then a few other different products. The best deal of the day to me was on D&A. A case of 2018 Topps Update Baseball with 12 silver packs for $440. Blowout had the same deal, for $60 more with no silver packs. I dunno, maybe it was just because I literally spent like i dunno 15 minutes on D&A's black friday sale, instead of the hours I spent on Blowout, that my opinion is skewered, but this year, Blowout was the worst Black Friday experiecnce I've had since geting back into the hobby  in relation to the anticpation and hype. At the very least, they should discount the stuff they have every year even more to sell more. Otherwise we'll see the same exact stuff next year at the same price. Steel City Collectibles's sale had a ton of stuff but nothing that caught my eye, but overall my expectations for them are lowest of the 3. Overall there were NO good footabll deals ANYWHERE. A little understandable I guess because of the Mahomes craze, but like really Optic Hobby for example is so marked up as it is (I think its $160-$170 a box) that you couldn't have a doorbuster of it for like $120 (Still WAY above MSRP)? I don't even know if people would buy it at $120, but it'd be nice to see SOMETHING decent for football and this isn't a Blowout specific complaint, nobody had anything worthwhile Football wise. I know this seems mainly like a Blowout Bash Post, but they pump their sale as this grand thing more than anyone else and I just think Blowout "could" do a better job with this sale. Do they "have" to? Nope..of course not, and it'll never be perfect, but I definitely was disappointed and I definitely wasn't alone.

Here are some additions to Cardfest! 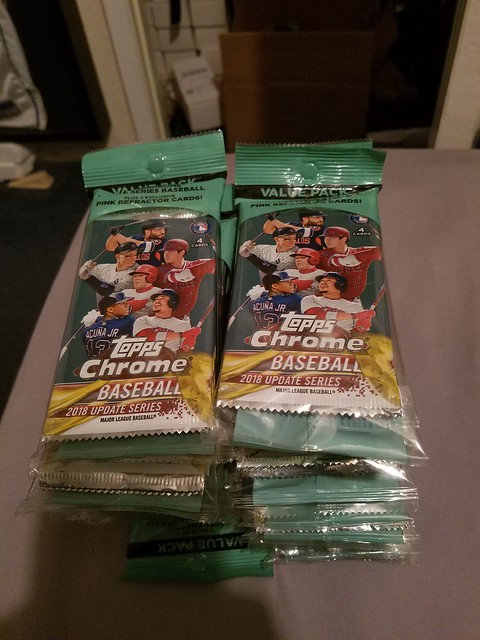 So I ordered 10 Mega Boxes from Target, but this past weekend was able to find the Value Hanger Packs. I bought all 20 packs. They come with Pink Exclusive Refractors and also Target had them on sale for 20% off! 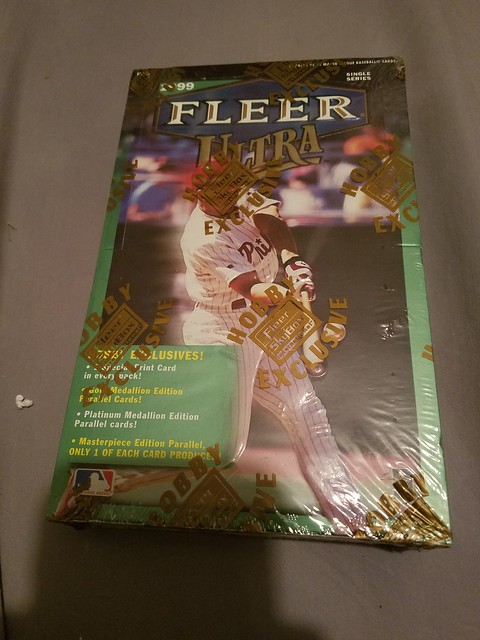 I always like to add a little old school to Cardfest, so here's a box of 1999 Fleer Ultra Baseball. It was cheap enough and maybe I can pull a cool insert or two or even better a Platinum Medallion. 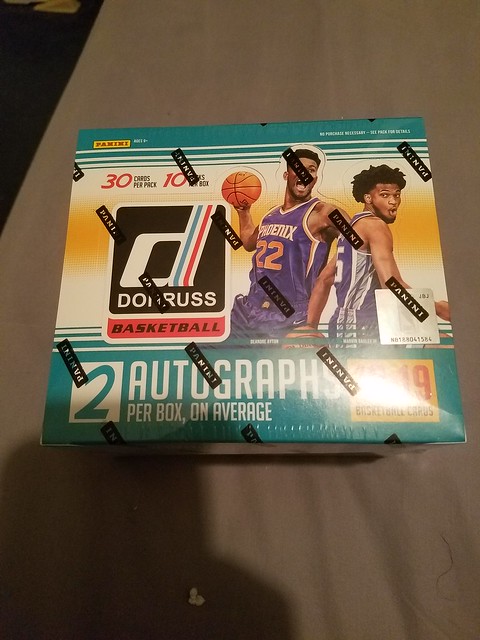 This is the first product of the new basketball season that I have bought. Should be a fun low end rip with 10 packs of 30 cards. Hoping to pull a Luca Donicic Auto!

It's time for the return of...CARDFEST!!

So last year was the return of something I like to call Cardfest. If you recall, I bought a TON (and I mean A TON) of product and saved it all up and opened up in basically the entire month of December. It was a BLAST (well until the anticlimactic end ha) and I decided I'm going to try to do it again! It's verrrrry tough to hold unopened wax, and I'm doing it a bit different than how I did it last year. Since I've been at my job over a year now, I have more vacation time to work with, so I'll be taking Christmas week off. It's that week off that I plan on opening everything I've accumulated. I'm not sure I can duplicate the sheer volume of product I had from last year, but I'll sure try! In fact, I've already started hoarding so here are officially the first two products for Cardfest 2018! 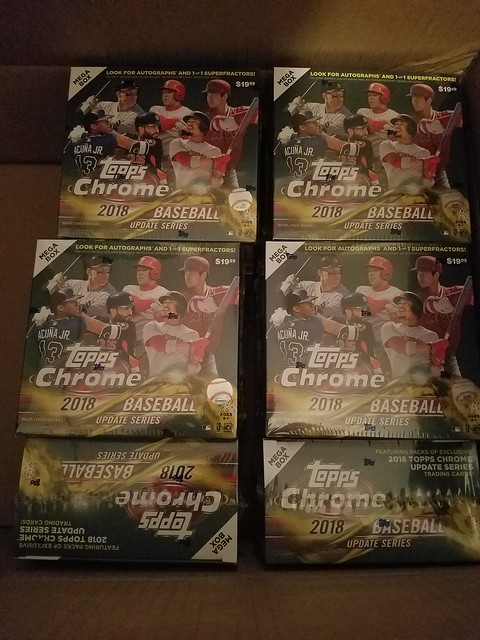 So here's a familiar face from last year's Cardfest. Last year, I tried a couple of boxes of this stuff. With this year's super loaded rookie class, I decided to try 10 boxes. These boxes can definitely be feast or famine, but it'll be fun to see what lurks in these Target exclusive boxes! 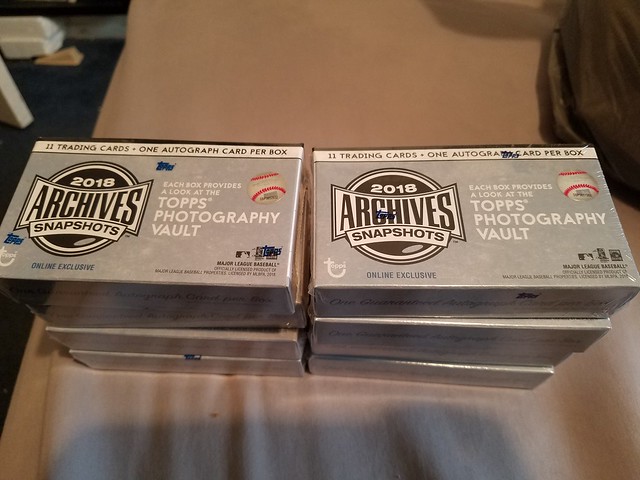 A new face to Cardfest, but not to breaking, I opened 4 boxes of this stuff last year and I decided to grab 8 boxes this year. At $25 a pop, it's a fairly low risk product with one auto per box. Maybe we'll get lucky and get a hot rookie auto here!

So just a couple weeks in and I've already got a bit of start on the Cardfest. I'm hoping to add a ton next week through Black Friday sales. I'll be updating this throughout the next few weeks with new additions and then December 26th, the day after Christmas, Cardfest WILL BEGIN!

I only bought one card in October but it's a doozy 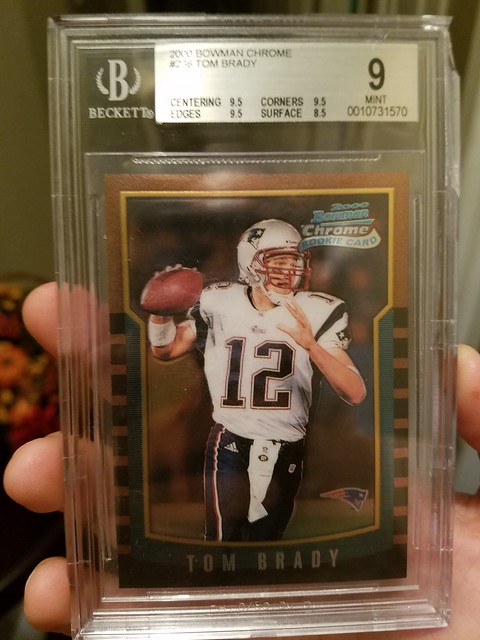 I've been wanting this card for a long time and finally went ahead and pulled the trigger. eBay Bucks helped me make this purchase. Brady rookies are pretty expensive but this one of his more "affordable ones" so to speak. I've always wanted his Bowman Chrome Rookie as Bowman Chrome is one of my favorite sets. Definitely happy to add this to my collection!
Posted by Chris P at 3:59 PM 2 comments: