I've seen it everywhere in the card community, a story about a guy who knowingly sold fake game used items to card companies for them to put into their memorabilia cards.

I just wanted to throw my own opinion out there on this issue. This is an issue a lot of us card collectors have always been curious about but honestly really don't want to know the truth to an extant. It's been the big elephant in the room for years, ever since the creation of game used memorabilia cards. Just how 100% sure are we that the cards we have in our hands contain actual game used material from the player on the front of the card. When game jersey cards first came out, Upper Deck used to be very specific on the backs of their COA. Look at the back of the UD Gary Payton Game Jersey card 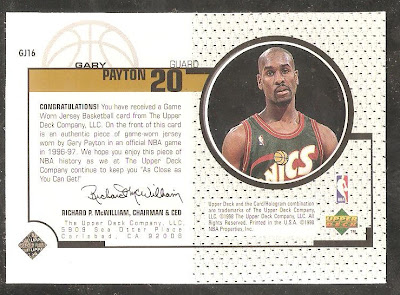 Back of Gary Payton's 97-98 UD Game Jersey Card. Not only does it note it's a swatch of a game worn Gary Payton Jersey, it specifically lists it was worn in the 96-97 season.

The back of the card is clear that not only is the swatch on the front a Gary Payton Game Used Jersey, but it's from the 96-97 season. That's how a lot of early issued game used memorabila cards are. They specifically state what the swatch is, and some of show pics of the memorabilia that was cut up to make the card (Early Donruss products do this). Fast forward to now and this is more or less what you get 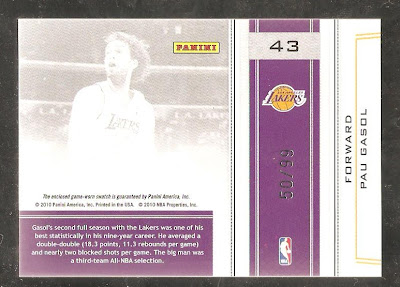 Memorabilia card from 10-11 National Treasures. The back only states the game worn swatch is guaranteed by Panini. Nowhere does it specifically say it was worn by Gasol nor what kind of material it is.

Now of course the common sense thing to assume is that the swatch is a Pau Gasol game used jersey. Why won't Panini or other card companies divulge this information anymore? I'm not trying to jump on the "all game used cards are fake" bandwagon at all, and I'm not bringing up the legitimacy of game used cards just because of this story. Every since the switch to vague COA's, I've always wondered why card companies switched to that format. Being a little more educated in the game used market, I know a ton of fakes circulate in that hobby, so you'd have to be naive to think 100% of the  cards you hold in your hand are really game used relics from the players they claim to be from. I'm not even just talking about using fake jerseys, what about mix-ups, you're talking about little swatches of material and people are human and make mistakes. What if your Babe Ruth bat chip card is really one of a lesser hall of famer or even a lesser player? What if you think you have a Pau Gasol Game Used Jersey card, but in reality it's Kareem Rush? We put a lot of faith in these companies to do the right thing and not screw us over and mislead us. We want to believe that we have is an actual link to that player. Again, I don't think it's an epidemic, I believe real game used stuff has been used in cards, I just don't think that we should just say "ah this guy has an axe to grind, he's just trying to plea down" and act like card companies are 100% innocent in all this. I really wish companies would be more willing to divert information on to where they got their memorabilia and would be willing to revert back to the old COA's where you knew exactly what you were getting. At least collectors wouldn't feel like the card companies were trying to deceive their customer if they went back to the old wording. Stuff like this feeds the paranoia that yes indeed, card companies are just out to make money, any means necessary and they don't care if you or me get screwed. The overproduction and vagueness of game used cards is one of the main reasons I got away from collecting those cards. I'd rather sell my 4 color sweet patch of what I think came from a Kevin Durant and buy a full Meigray certified jersey that I 100% know came from the NBA. I know that's an extreme example and not everyone can just buy a Durant jersey at the snap of their fingers but as long as card companies continue to be vague about their memorabilia cards and refuse to discuss their methods of obtaining memorabilia, I'm staying far away as possible. I do honestly think, like many others, that if you want your game used card fix, older cards are the way to go. At least you have some idea of what you really have in your hand.
Posted by Chris P at 9:59 AM 4 comments:

What Was I Thinking?!?!? Basketball Starting Lineup Edition

After finishing my series on SLU's I reflected back on all the lineups I bought throughout the years and remembered the good ones.....and the bad ones as well. This post will showcase what I believe are the 5 WORST lineups I ever bought in Basketball. Now honestly, I don't think basketball was as atrocious as the other sports, since Basketball was my wheelhouse, but still, there were a couple regrettable decisions i made. Yes I paid full retail for these babies...brace yourself 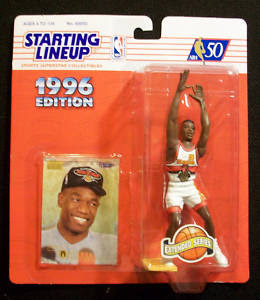 It's not like the player is bad, Mutombo is one of the greatest defensive players ever to play the game. It was just a relatively easy figure to find and probably wasn't worth paying full retail for. I was on a Basketball Extended kick at the time though, and bought this and the Larry Johnson in the New York Knicks Throwback (which I still think is a cool, but easy to find piece). 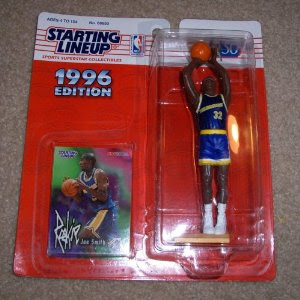 The story is cooler than the piece. I vividly remember being at basketball practice on a Saturday Morning and after practice my dad had this in the car. He had found it at Wal Mart, and remember it's Joe Smith's Rookie Piece and to find it at the local Wal Mart was Amazing at the time. I think it's one of those "defensible at the time" purchases, as it wasn't one I ever saw on shelfs again, but at the end of the day it IS Joe Smith, a journeyman who played for well over double digit teams. 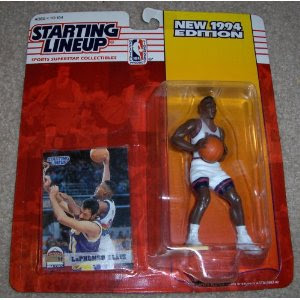 This was a pre collecting boom purchase and I remember vividly getting this and the Latrell Sprewell for Christmas. My parents found them at the local Venture. Again, maybe defensible at the time, but at least Joe Smith was a #1 pick and still had promise. I think at this time Ellis was basically a role player and probably not even worth making a SLU of. 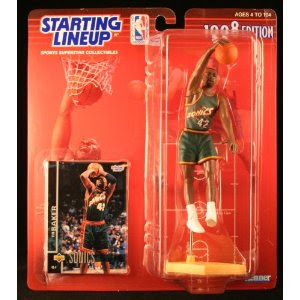 I already had Baker's harder to find (so to speak) 96 Rookie Piece, there was no excuse to buy this one. It's from the last Starting Lineup set and trust me, there were PLENTY to be found. I could've waited and got this on clearence for a couple bucks instead of the 7 or 8 bucks I plunked down. 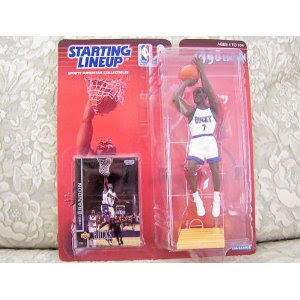 Terrell Brandon's rookie piece was easy to find and I never bought it, so why would I buy his easier to find 2nd piece?? Basketball isn't really about the player selection, I mean Terrell Brandon was an All Star as was Vin Baker, but these two pieces were very easy to find. They were EVERYWHERE, and despite that I still decided to pay full retail price.

OK, It's alllll over now, can I please show off my favorite pieces now?
Posted by Chris P at 8:03 PM 2 comments: