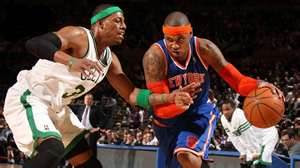 It's that time again for me. Next week is my birthday, and since I got Christmas and my Birthday in the same month, I usually decide to buy me something as a little early present. I decided on a Carmelo Anthony Game Used jersey from Meigray. He wore this jersey on February 3rd, 2012 against the Celtics. The Knicks lost by 2, but Carmelo put up 26 points, 6 assists, and 3 boards in the game. I've always loved the Knicks Road jerseys, so this is an awesome addition to the collection! Here are the pics!

I picked up 11 more autographs from Leaf's Wrestling Originals Set. Here they are 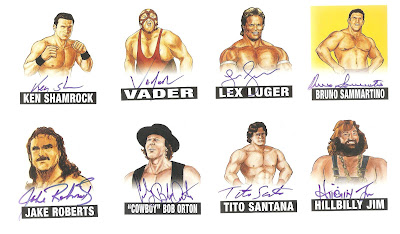 Gotta start up with some Attitude era stars like Ken Shamrock and Vader. Vader was an awesome super heavyweight and he didn't even look half bad when the WWE brought him in for a one shot match against Health Slater while they were bringing back legends leading up to Raw 1000. Shamrock was of course "The World's Most Dangerous Man" and had a good IC Title level run and a memorable feud with the Rock. Lex Luger was a big star in the mid to late 80s and 90's. "The Total Package" biggest success came in WCW where he was a multi time Heavyweight Champion. Bruno Sammartino is a wrestling pioneer for the WWE. He held the title on two occasion, but held it for a combined 11 years. In this era, no one will ever come close to Bruno's longevity record. It's too bad he had a falling out with the WWE in the 80's. The Sammartino card is the gold parallel version # to 50 (mine is 20). Despite his personal demons, Jake Roberts was not only a hell of a worker, but hell of a promo as well. One of the best talkers in wrestling history, he really knew how to rile opponents and fans alike, weather as a good guy or a sadistic heel. I always get mad the modern day WWE treats the DDT like a transition move, because when Jake used it, it looked devastating, and it was lights out for his opponent. Cowboy Bob Orton is much more than Randy Orton's father. He was a big time heel in the mid 80's along with Roddy Piper and Paul Orndorff. He always had that mysterious broken arm, that never seemed to heal. By the time I got into wrestling in the early 90's, Tito Santana was basically enhancement talent, but he was great worker and big time player in the 80's as a former intercontinental and tag team champion. Hillbilly Jim was just a guy I remember shilling WWF Videos when I was kid, but he came in to the WWF with big fanfare and was a close friend of Hulk Hogan.

Not only was Scott Steiner part of one of the successful and popular tag teams in wrestling history with his brother Rick, but he carved himself out a nice solo career too and reinvented himself as Big Poppa Pump. It's crazy to think that both guys are one in the same. George "The Animal" Steele is one of the most unique wrestlers ever to step in the the squared circle. His crazy tactics including eating turnbuckles make him unforgettable. He also had a memorable feud with the Macho Man Randy Savage because he had a crush on Miss Elizabeth. Diamond Dallas Page aka DDP worked his way from being a non wrestling manager to being a WCW champion through hard work and maybe a little bit of help seeing that he was good friends with Eric Bischoff. The master of the Diamond Cutter and the "Self High-Five", Page was big time player in the Monday Night Wars and would become a multi-time WCW World Heavyweight Champion.

I really love this set and it brings back fun memories. Hopefully I'll be able to add some more at a later date! I'll be on the lookout!
Posted by Chris P at 12:50 PM 4 comments:

Don't have too many Baseball Jerseys, in fact this is only my 4th but it's a nice one. It's an Evan Longoria 2011 Game Used Home Jersey that he autographed and inscribed worn against the Boston Red Sox. It's also MLB Authenticated and the database shows it was worn June 16th 2011. 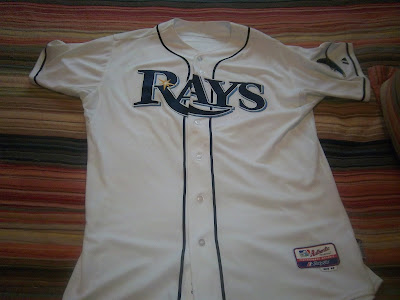 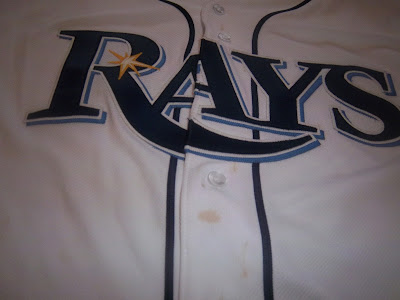 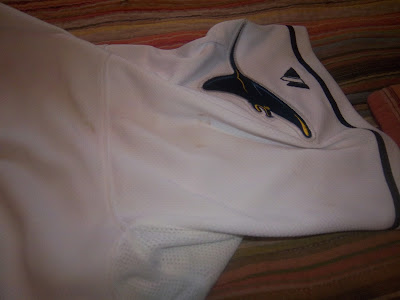 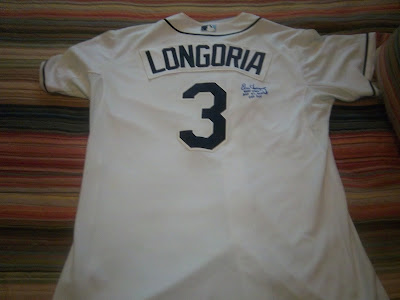 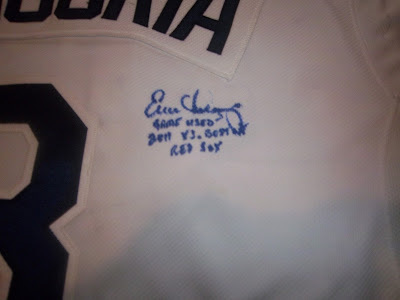 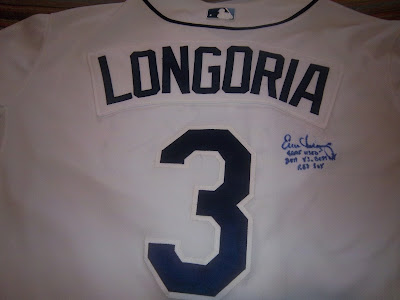 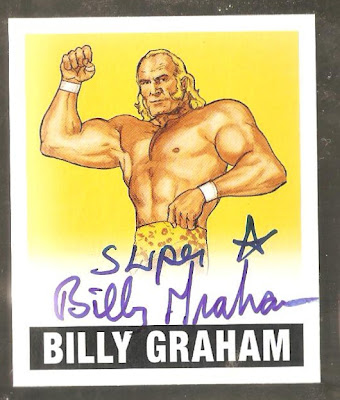 Another autograph from Leaf Originals Wrestling set. Superstar Billy Graham was the pioneer of the cocky heel wrestler. He was pretty much the first "cool heel" so to speak and was the inspiration of other wrestling icons such as Jesse "The Body" Ventura and Hulk Hogan himself. Graham became WWWF champion in 1977 defeating Bruno Sammartino. His relationship with the WWE has always been rocky (I believe currently, he's on the outs with them) but he is a WWE Hall of Famer, and one of the biggest wrestling legends ever the grace the squared circle.
Posted by Chris P at 1:34 PM No comments:

When I heard Leaf was coming out with a Wrestling Set that had autographs galore, I couldn't wait for it to come out. I've been a huge wrestling fan all my life and here was a chance to obtain autographs of some of the guys I grew up watching. For some of these guys, it's their first certified autographs and they are all on card. Sure the pics may look a little goofy, but I still really like em. Here's the first wave of autographs that I got. 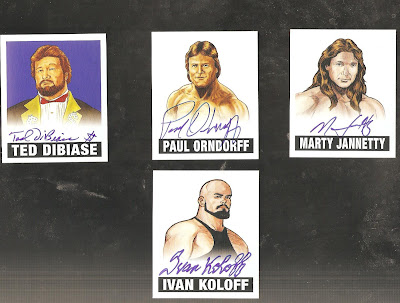 The DiBiase Is Awesome. The Million Dollar Man has always been a favorite of mine, from his theme to his unique laugh, this is also the blue bordered version and it's numbered to 10 (mine being 9 of 10). Mr. Wonderful was a big star in the 80's Rock N Wrestling Connection Era and he and Hogan had a memorable feud in the WWF during that time. Marty Jannetty is of course the other half of the Rockers of Shawn Michaels, and they were one of the greatest high flying tag teams of all time. He's before my time, but I know my wrestling and Ivan Koloff "The Russian Bear" was the one who ended Bruno Sammartino's 7 year WWWF title reign. He also had a successful run in the 80's NWA as part of "The Russians" with fellow "Russian" Wrestlers Nikita Koloff and Krusher Kruschev. This is definitely a set I'm gonna be chasing. I'm going to go after all the wrestlers that I do not have autographs of. I have more coming in, and I'll showcase those as soon as I get them.
Posted by Chris P at 4:41 PM No comments: 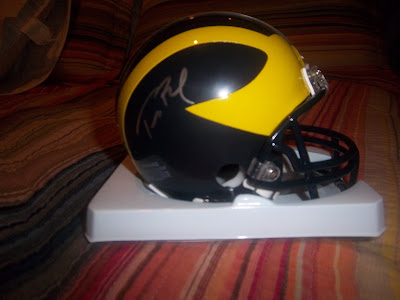 Another addition I was able to add due to selling a lot of my collection. I needed a Tom Brady Autograph in my collection and lo and behold here it is. Certified by Gridiron Authentics, it's a nice mini helmet signed by Brady in silver ink. Check another name off the list!
Posted by Chris P at 12:38 PM No comments: