Not too many people follow this blog, but it's been about a month since I last posted and there's a reason for that. On June 9th, my world came crashing down as my Dad suffered an unexpected heart attack and passed away. All my life it's just been the 3 of us, Me and My Parents. We did everything together and we are a super close knit family. I was an only child so that's a main reason. Me and my Dad of course were huge sports fans. We were diehard Cowboys fans and although we butted heads in Basketball (my dad tended to bandwagon team to team until he stuck with the Spurs after their first title) we joined forces to root against that "snake" Kevin Durant after his move to Golden State. I know fellow blogger, San Jose Fuji, recently lost his mother as well and I remember how crushed he was and it was me on the other side sending well wishes and thoughts. Now it's me getting the well wishes. It's been the absolute worst period of my life and I'm nowhere near recovered. The sadness is immense and I know it's going to take a while for it to go away. I hadn't broken anything since my Noir break (which I opened before his passing, pulled a Giannis Spotlight Signature Redemption) and really had no desire to nor post anything to the blog. But as the pain and sadness became just unbearable, I figured that I would treat myself to a 3 box break of Chronicles Basketball. Just to get a brief escape from reality, to have something to look forward to..a small window of hope for something to  cheer me up even if it was just for a few minutes. I got the boxes in last night and decided to open them with my Mom. Now typically, I open my stuff on my own, but I wanted my mom to be a part of it. So I started the break and in the middle of box #1 I pulled this 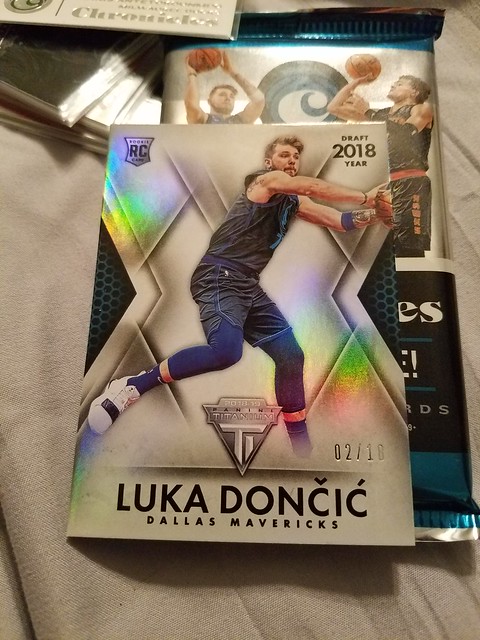 I couldn't believe it...a super short printed Luka rookie numbered to 18...I looked at my mom with tears in my eyes and told her "this is Dad"..."this is his doing". It was the beginning of a very special break.  In the same box I pulled this 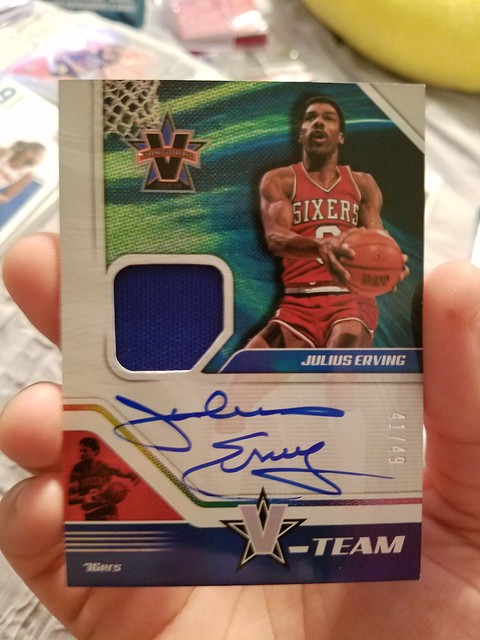 An On Card Auto/Jersey card of "Dr J" Julius Erving. I couldn't believe it. As if the Luka wasn't enough. Honestly the Dr. J and Luka were such great pulls, nothing else would've mattered in the other two boxes. I also pulled a smattering of smaller end cards of rookies including 3 other different Lukas. Box #2 didn't have anything earth shattering, but the final box came up with two more monster hits. First up was this 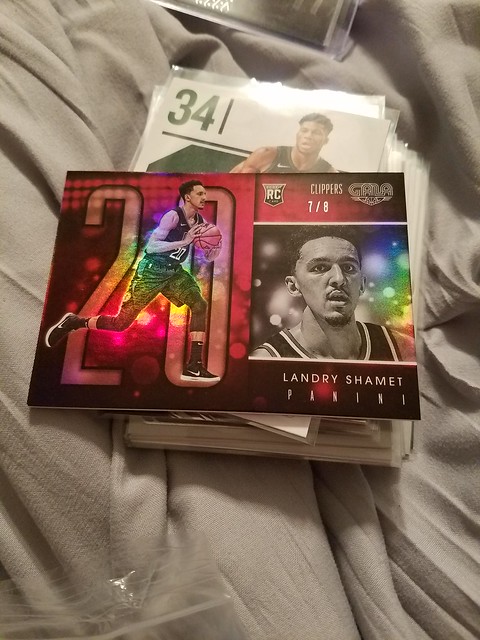 On it's face...Landry Shamet may not seem like a "monster" pull, but Gala rookies are SUPER rare and popular. This is probably a $200-$300 card because of the rarity. Once again, Dad was working his magic. In the 2nd to last pack I noticed I got a redemption. I know Luka's a redemption so I decided to save it for last. It might not have been Luka again, but in all honestly it was even better and I'll explain why

This is a redemption for an on card Reggie Miller Autograph numbered to 10. Now on its own, it's an incredible pull. But what makes it even more special is the tie Reggie Miller actually has to our family. You see back when Reggie Miller played, my mom always found him "cute" and my Dad would from that point on always refer to Reggie as her "boyfriend" in a joking manner. It's an inside joke that carried on the rest of our lives even when Reggie transitioned into an announcing role for TNT. It was just such a perfect pull to end the night and there's nothing anyone can say that would convince me that Dad didn't have anything to do with this pull and this break in general.

I debated whether to share this or not, as it's still hard not to get emotional but I decided it was worth sharing. It was a temporary band aid, it was a brief moment of joy. As I write this, my heart is still filled with sadness as my miss my Dad every second of the day and I'd do anything in the world to have him back. But at least for a couple of hours last night...my Dad gave me a reason to smile..he knew I needed him and his own way..he made it happen..like he always did...and like he always will. Thanks Dad...I love you and miss you with all my heart. 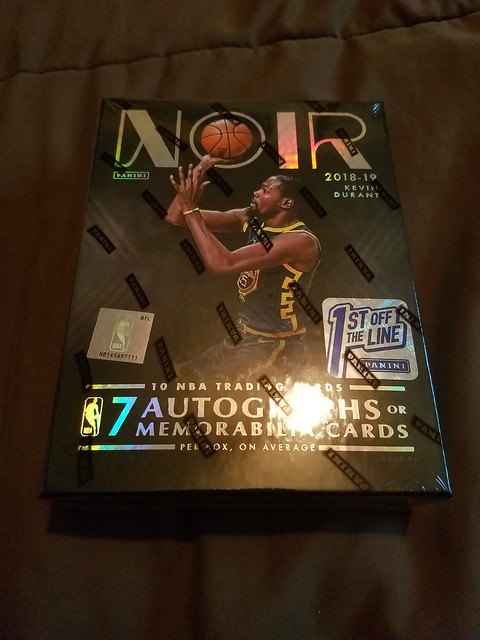 I swore I was going to pass on this, as I already have two regular boxes of Noir coming in, but..I'm weeeeeeak and gave in and bought a FOTL version. The bonus here is a metal framed card numbered to 9. Unlike most FOTL products where the exclusive replaces as card, the exclusive here is an ADDITIONAL card, which is much better to me. This stuff is damn pricey ($500 a box) but I've actually tried Noir every year since I've been collecting. I've done pretty could as every year as yielded something awesome (Giannis Auto in 16, Kobe Patch/Auto in 17, and Giannis Spotlight Auto in 18). Let's see if I made a mistake and should've trusted my gut or if I made a great decision.

Overall Thoughts: And just like that...this break DESTROYS any kind of goodwill I had from last weekend. This was straight up GARBAGE and a candidate for absolute worst break of the year. This was SUPER terrible..nothing worth a crap. I shudder to think what my REGULAR boxes of this stuff will look like. Total disappointment 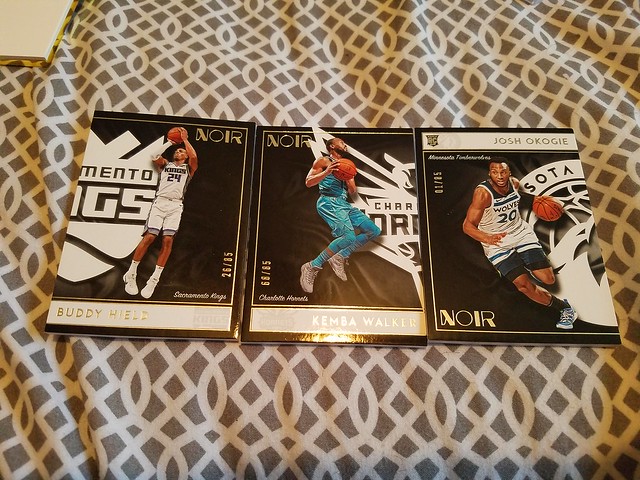 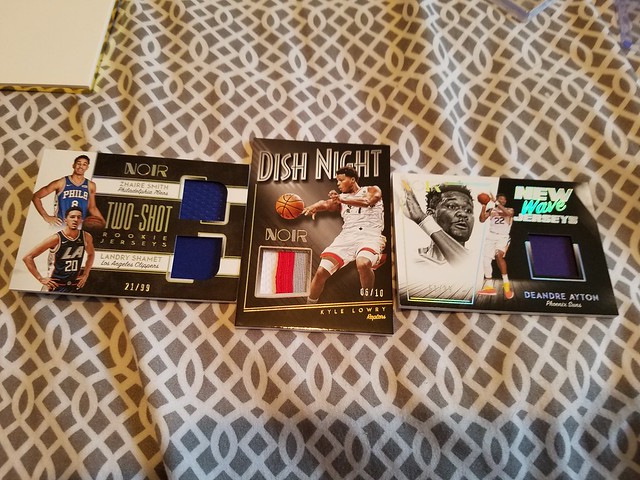 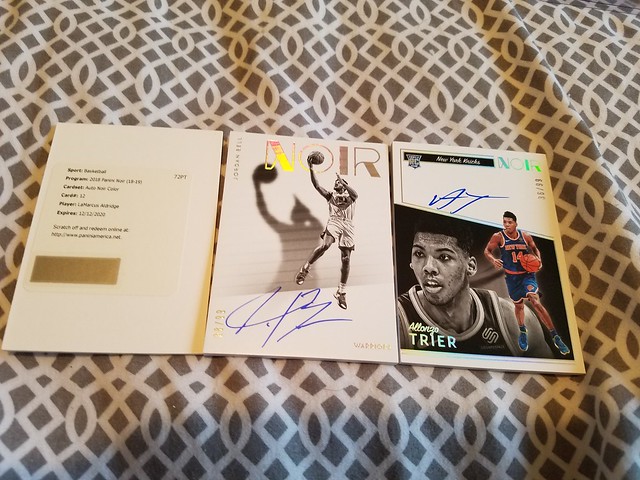 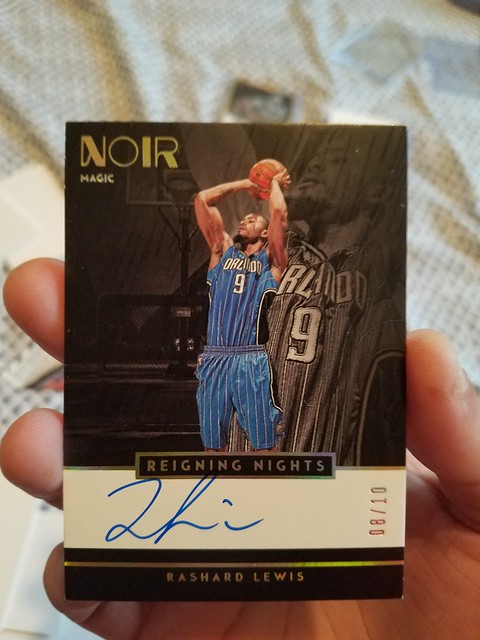 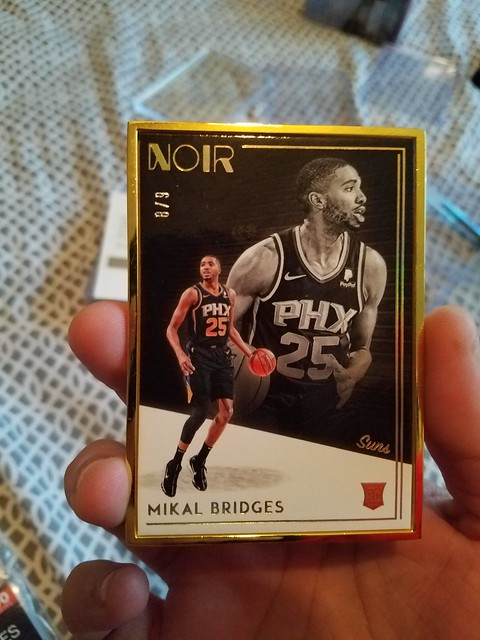